Jeff Corirossi started his career in Information Technology when he was 19. Originally taking a job as an I.T. troubleshooter, he would constantly train on new technologies and concepts, while working his way up to C.I.O. of MBG Bancorp before his entrepreneurial spirit took over. Fresh off Y2K challenges, Jeff left corporate America to start his own I.T. Consulting company in May of 2000. Currently President of Accredited Data Centers Inc. (aka ADC), it is his goal to bring honest and affordable I.T. support to the SMB market. His most common phrase is “Too many times I see the business built around the technology, when really, the technology should support the Business.”  Jeff has served on various Boards over the years, including Chambers, Animal rescues, and private companies. In addition to the GMACC, Jeff currently serves on the Fox Valley Therapy Dog Club and Border Collie Rescue Boards.  Jeff has resided in Montgomery for over 15 years with his wife, two daughters, and four-legged family members. When not doing I.T., Jeff spends his time traveling, camping, and playing with his dogs. He and his four-legged teammates, Comet and Astra, like to travel and compete in various Frisbee events in the Midwest area. Jeff and Comet are also a certified Therapy team and can regularly be seen at Rush Copley Hospital, IMSA, Gateway Foundation, and multiple school districts working with those that need the comfort of a furry friend. 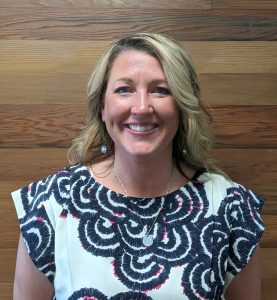 Heidi began her career in marketing and sales after graduating with her BA in Communication from Michigan State University. She is currently pursuing a double Masters in Business Administration and Leadership & Management while working as Earthmover Credit Union’s Business Development Manager. Heidi has served as the Business Development Manager at Earthmover Credit Union since 2021. Heidi developed a strong sense of devotion to the Chamber when she was asked to join the Board after years of belonging to the Chamber. Heidi is highly motivated and driven to recruit new members to the Chamber in order to grow the Chamber and create even further networking connections for those businesses in the greater Montgomery area. Heidi resides in Yorkville on a farmette with her husband and several children. Heidi enjoys supporting foster children and foster families, traveling, gardening, and spending time with her family.

Debbi Albright is a lifelong resident of the Aurora, IL area, currently residing in Montgomery, IL. She has one grown daughter, Samantha, who works in the restaurant industry while pursuing her bachelor’s degree at Aurora University. After years of working in retail, caring for her daughter, and operating her own daycare, Debbi began her career at Fox Valley Habitat for Humanity in May 2011 as the Office Manager. She currently is the Director of Operations and is responsible for accounts payable and receivable, family selection, managing office support staff, payroll, maintaining mortgage and escrow statements, and much more. Debbi is currently on the Board of Directors for her homeowners’ association. She recently became the Treasurer and Secretary for the Montgomery Chamber Board of Directors. Through her work with Habitat for Humanity, Debbi has devoted her time and passion into her work. She takes pride in the non-profit that she works for and enjoys creating personal connections with her office staff and homeowners. In her time away from Habitat, Debbi’s passions include crafting, spending time with her daughter, travelling as much as possible, and spending time at her get-a-way lake home.

Board of Directors:
Sonya Abt – Village of Montgomery

Loreto Arzola, has been a long time Montgomery resident.  He has been in the insurance business for 33 years with State Farm. He currently has two offices one in Cicero IL and the other in Montgomery.  He enjoys helping his community and developing new Insurance producers.  His coaching and mentoring is well known amongst his colleges. He prides himself on building a high performance team. He has accomplished several of the highest accolades in the insurance industry as well as performing as a leaders with in his company. He spends time traveling with his family and enjoys running.

Josh has proudly worked at the Fox Valley Park District since 2016. His first title was Outdoor Athletics and Events Manager overseeing youth leagues, concession operations, tournament rentals, athletic programming and leagues. In 2019, Josh was promoted to Vaughan Athletic Center Facility Manager where he currently leads a team of dedicated professionals in the areas of: tennis, athletics, aquatics, and facility management. Josh is a certified park and recreation professional who graduated from the University of St. Francis (Joliet, IL) in 2012 with a degree in Recreation Administration. Josh’s background in event management, prior board experience, and working directly with the community on a daily basis allow him to bring a unique young presence to the board of directors. Josh is really proud of the growth that the GMACC has seen in the last year and is excited to see what the futures holds for the Chamber. His favorite GMACC events are the Annual Golf Outing and Monthly Lunch and Learn Events.

Michele Bergeron is the Executive Director for Oswego Senior Center. Michele started her career with the Village of Oswego from 2005 to 2017 as the Community Relations Manage when she transitioned her career to the non-profit world specializing in fundraising, engagement, building relationships, marketing, strategic planning and grant writing. Michele resides in Oswego and loves serving the community as an Oswego Rotarian, a member of the Board of Directors for the Greater Montgomery Area Chamber of Commerce and volunteering at the Food Pantry at Big Life Community Church. She resides in Oswego with her dog, Lily.

Cindy Ferchen is currently working as an Office Manager at NSG Construction LLC. The company remodels homes including kitchens, bathrooms, basements, laundry rooms and family rooms and decks. As the office manager, She coordinates projects & timelines, oversees HR for employees and manages bookkeeping. Cindy was the Greater Montgomery Area Chamber of Commerce Membership Director. She enjoyed working for the Chamber, attending Networking Events, working with surrounding businesses and the Board of Directors. She is excited to continue to be involved as part of the GMACC. She is actively involved in the church she attends, Crossroads Community Church in Aurora. She enjoys her women’s Bible studies and hosting a small group in their home. Cindy enjoys being active with her family playing pickleball, volleyball and hiking.

Tom and his wife have lived in Yorkville since 2000 and  he is very active in his Community. He has been a past treasure of St. Patrick’s Church. Tom is currently serving on the District 115 School Board for the past ten years as well as be a Community Liaison for the Yorkville Education Foundation. Tom has been very active on the Montgomery Chamber Board and has worked on both the Cemetery Walk and Christmas Promotions.  Tom is past Olympic Torch Bearer representing the United States in the 2012 Olympics.  He is also a Life Coach.

Kealan O’Neil attained his bachelor’s degree in Landscape Architecture at University of Illinois Urbana- Champaign in 2012 and then furthered his education with a Master’s in Business Administration from Aurora University. With a background in Landscape architecture, Kealan began his career as a Landscape Designer for Clarence David’s & Company. Kealan then entered the real estate world in 2013 where he started to work part-time for Coldwell Banker in Oswego. While working in Rel Estate, Kealan began working for his father’s company R.J O’Neil Inc.  After 6 years with R.J. O’Neil he decided to further pursue his passion for real estate full-time and proceeded to launch his company, O’Neil Property Group, where he has been a Designated Managing Broker since 2018.

Betsy Santana, Marketing and Development Coordinator for Mutual Ground, has been working in the non-profit world for over 15 years. With a background in education, Ms. Santana began her career working as a substance use prevention specialist with Breaking Free. Working in the field has allowed her to really understand what type of support a non-profit needs from the development team. After working in Prevention for 9 years, Betsy transitioned into the role of marketing and fundraising coordinator, managing fundraising and marketing efforts for the agency. When Breaking Free merged with Mutual Ground, Betsy joined the Mutual Ground Advancement Team where she has been working to promote the mission of Mutual Ground for 3 years.

Kevin Senechalle is a Financial Advisor at Allied First Wealth Management, which is a division of Allied First Bank.  The Bank is located at 3201 Orchard Road in Oswego Illinois, where Kevin has been helping clients since 2016.  He is committed to helping Individuals develop investment strategies to meet their personal, professional and retirement goals.

Prior to Financial Planning, Kevin played basketball at The University of Wisconsin Parkside.  An NCAA Division 2 program located in Kenosha Wisconsin.  He graduated with a degree in Business Finance which led him to his career today.  Still finding much joy in the game, it’s only fitting that Allied First would have its own basketball court located right inside the Bank.